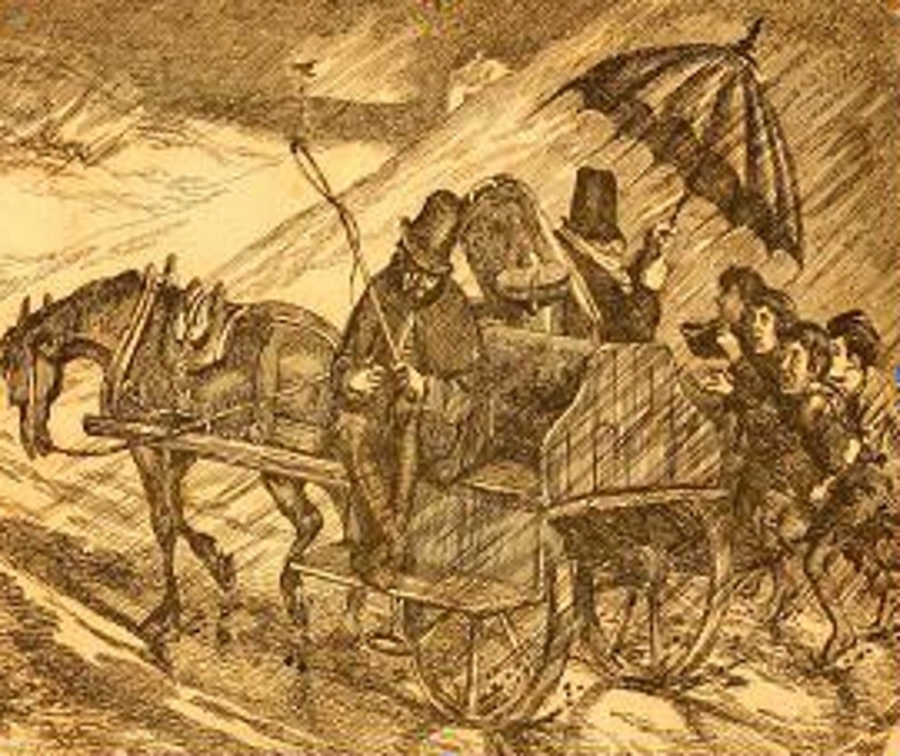 Tourists are a regular sight these days, with some holidaying locally and others en route to Blarney or Killarney. Travel accounts of journeys from Cork to Macroom and westwards begin to surface from the early 1800s. The route usually taken was south of the River Lee and rarely was the northern route followed, but there do exist some accounts.

An unidentified and unimpressed German travelled the northern route in 1832, and didn’t mince their words, stating that ‘a pair of sturdy post horses trotted along with us [from Cork] in a light trap over the hills on the north side of the Lee to Macroom, a miserable dump where we did not bide longer than was necessary to feed our bay horses. As this route is hardly used by travellers, it is not only lacking in decent inns but also in coach-houses’.

In late 1835, George Farquhar Graeme Mathison arrived in Ireland, by his own admission ‘to collect information on religious rather than general subjects’. A member of the Church of England, and a believer in following ‘the middle road’, Mathison had previously visited Brazil, Peru and Hawaii, which was quite a feat in those days. Fresh from meeting Bishop Murphy in Cork, Mathison headed for Killarney, passing Dripsey Paper Mill where ‘a number of new cottages’ were being built. Stopping at Dripsey village, Mathison spoke to a couple within their dwelling, and learnt that a daughter attended school two miles away, at five  shillings a quarter, but that they could not afford to send a son. The father complained of bad times and lack of work.

Mathison then stopped at the next village, which is not named, but must be Coachford. This is one of the earliest accounts of the village, coming prior to the Great Famine, which would devastate the area a decade later. Of Coachford, Mathison states:

I … walked to the chapel, where I found a dozen or more women on their knees preparing to be confessed, previously to communion. It was a small homely edifice, but clean. I then passed to the schoolhouse, and found about fifty children there, girls and boys together; the former at needle-work. I examined them in Scripture history, which two boys understood very well indeed, the others imperfectly … the master complained bitterly of want of books.

The priest and his coadjutor then came in: one a very respectable, clerical, serious-looking divine; the other more countrified in dress and manner, but shrewd enough. He accompanied me on the road until we overtook my carriage; he said they had invited the Protestant clergyman most earnestly to unite in looking after the school, but he had pleaded religious scruples and refused. There was something hearty in the welcome which this priest gave me to the country as an English stranger, and in the readiness which he expressed to lionize me over the neighbourhood: let me thank him for his good intentions.

Mathison then visited the cottage of a shoemaker, his wife and five children, who were ‘Protestants from Cork’. He then proceeded to visit a school in another unnamed village (Carrigadrohid)  and towards dusk, reached a town (Macroom), which he unfavourably describes as ‘a dirty wretched-looking place … I saw the chapel overtopping the church in height and appearance’.

If Mathison and our anonymous German friend were to return to modern day Coachford, they would surely be impressed with its schools, shops, businesses and facilities. Followed perhaps by a trip to Macroom town to delight at its marvels and developments!

Image: An outside jaunting car in a storm (Daniel Maclise, 1836).