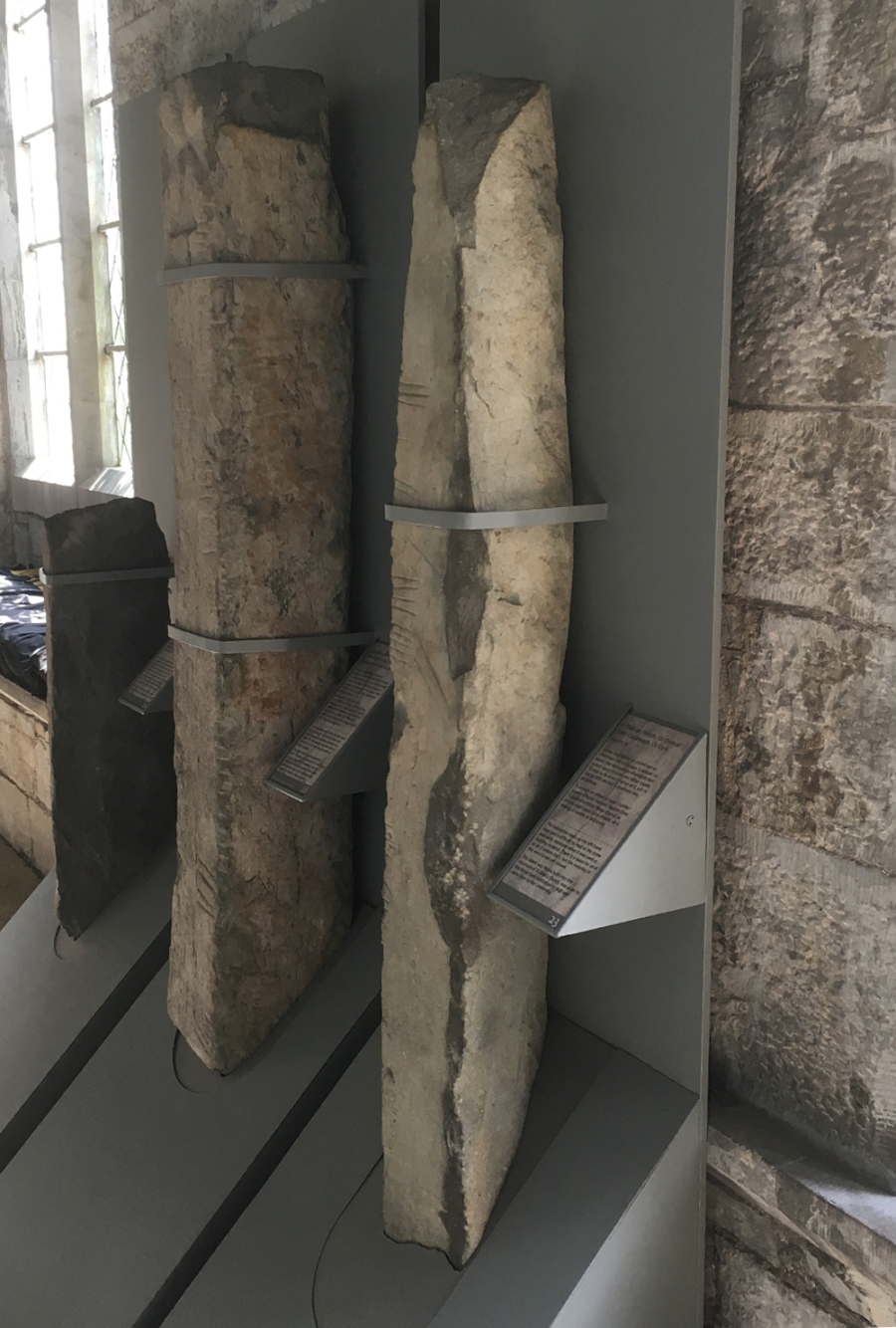 Note: please also see our article Journey of an ogham stone: from Aghabullogue to UCC (part 2)

In 1838, workmen under the direction of architect William Hill were demolishing the old church in Aghabullogue graveyard, when they made a significant discovery. Embedded into the church wall was a long, narrow stone. Although damaged, there could be no doubt. It was an ogham stone and an item of antiquity, judging by the notches along its edges. The stone was subsequently removed and transported to Cork city. Today it forms part of a stone collection at University College Cork, and is known as the Coolineagh ogham stone.

Ogham stones are mainly an Irish phenomenon, and common in counties Cork and Kerry. Ogham as a script reproduced the sounds of early Irish, and was possibly influenced by Latin in the early centuries AD/CE. It comprised groups of lines or notches, generally found on standing stones, forming inscriptions cut along or across their vertical edges. Ogham inscriptions are read from the side, from the bottom upwards, and sometimes extend across the top of a stone and down the other side.

Inscriptions often take the form of names, with a first name followed by a father’s name and/or that of a more distant ancestor. Linguistically, ogham is dated from the early centuries AD/CE, to about the eight century AD/CE, and was in use before and after the arrival of Christianity to Ireland.

Suggested purposes vary … stones could have acted as memorials or grave-markers; were sometimes associated with pilgrimages; occasionally were territorial markers; or could signify land ownership. As for the Coolineagh ogham stone, clues exist which suggest it may have been associated or connected with the early ecclesiastical site at Aghabullogue, within which it was found.

Aghabullogue graveyard is a place with connections to Christianity for some 1400 years. Its origins can be traced to an ecclesiastical site, said to be associated with St Olan (or Eolang), the patron saint of Aghabullogue and confessor to St Finbarre of Cork. Part of the original oval-shaped boundary of this ecclesiastical site still exists, and is bisected by a public road. Over time, site usage and boundaries changed, with the central part of the site becoming a place of worship, having a stone church, and surrounded by a defined graveyard. At some point, Coolineagh ogham stone was incorporated into the structure of the old church, where it was to remain until demolition of the church in 1838.

Such practice was not unusual. Ogham stones are routinely discovered forming part of church structures. They were also used as roof lintels within souterrains of medieval ringforts. As to exactly when the ogham stone was incorporated into Aghabullogue church is unclear, but according to Brady (1863) the church was built around the 1690s and was ‘thoroughly repaired’ by 1828. One decade later Lewis (1837) was describing the church as a ‘small dilapidated structure’, about to be rebuilt by the Ecclesiastical Commissioners.

Another ogham stone stands within the graveyard, a few metres away from the church site. ‘St Olan’s stone’ according to Brash (1879) was held in great veneration and had a moveable cap, the Caipin (or Coppeen) Olan which was occasionally borrowed, and believed to be a talisman, particularly in cases of childbirth. With St Olan’s stone in such close proximity, there is the possibility the Coolineagh ogham stone stood or originated nearby, in the early Christian period, only to end up as part of a church structure centuries later.

Another clue as to the origins of the Coolineagh ogham stone may lie in the inscription. Ogham expert R.A.S. Macalister (1945) examined the stone and was of the opinion that the inscription read ANM NETACUNAS CELI VIDETTAS. However, prior damage caused to the stone, probably due to its use as a building item, renders an exact reading extremely difficult. Windele (1839) and Power (1932) both stated it was impossible speculating as to the original inscription. McManus (1991) slated Macalister’s reading, calling it a rash reconstruction and not to be trusted. If the reading of ‘ANM’ can at least be held as true, then this would have great relevance, as that particular word is a feature of ogham stones largely confined to Cork and Kerry, and dating towards the end of the period when ogham stones were being erected. This would possibly place the Coolineagh ogham stone within the Christian era, and after the establishment of Aghabullogue as an ecclesiastical site. It is also perhaps worth noting, for what it is worth, that Macalister contended nearby St Olan’s stone also contained the word ‘ANM’ in its inscription.

Noted Cork antiquarian John Windele gives details of the stone’s discovery in his 1839 publication Historical and descriptive notices of the city of Cork and its vicinity, Gougan Barra, Glengariff, and Killarney. Windele states:

A fourth Ogham stone has been added to the singular collection at the Cork Institution, by William Hill, Esq. ; who in taking down the old unsightly church of Ahabullog in 1838, discovered it imbedded in the wall, of which it formed a part. The inscription, however, is mutilated, and consequently of little value. This stone has been evidently dressed by some Gothic mason, in constructing the church – a work of the last century.

In Windele’s time, ogham stones were regarded by many as having an almost mystical quality, and little was known about them. Research was in its infancy, but at the forefront were leading Cork antiquarians John Windele, Abraham Abell and Fr Matthew Horgan. Windele was no stranger to Aghabullogue, having procured an ogham stone from Glounaglogh, Rylane during the 1830s, which had spent time serving as a lintel in a pig-sty.

Abell, a Quaker, was a manager with the Royal Cork Institution, and was also head of its antiquities department. He collected and donated many items to the Institution. For years he managed its museum affairs (which included ‘curiosities’ such as fossils, shells, coins, geological items and antiquities such as ogham stones). Abell became something of an authority on ogham stones, and introduced a transcript of ogham to the amazement of attendees at the proceedings of the Cork Cuverian Society in 1836.

Fr Matthew Horgan, parish priest of Blarney, was another antiquarian interested in ogham, and participated with Abell in a lecture on ogham, given to the Cork Literary & Scientific Society during the late 1830s. Horgan, along with Windele, Abell and other antiquarians in the South Munster Antiquarian Society, would engage in systematic excursions around Cork, Kerry and wider parts of Munster, seeking out items and sites of interest, particularly ogham stones.

It is unclear whether these individuals, or any other antiquarians, travelled out to Aghabullogue to view the ogham stone, when taken from the demolished church, but they certainly would have examined it closely, following the stone’s transportation to Cork city. There it came into the possession of the Royal Cork Institution (RCI), an educational centre and cultural institution founded in the early 1800s, for which a Royal Charter issued in 1807. In 1832, the RCI had taken possession of the old Custom House (now the Crawford Art Gallery on Emmet Place), and this would become a new home for the Coolineagh ogham stone, until it was transferred years later to University College Cork (formerly Queen’s College, Cork).

Windele’s 1839 publication refers to three ogham stones in the RCI’s possession at its museum. The republished version of Windele’s book in 1849 refers to four ogham stones, implying Coolineagh ogham stone had taken its place in the museum. Windele wasn’t slow either to sing the praises of Abell or indeed his own, stating:

The institution is distinguished beyond any other, by the possession of four of those ancient monumental stones inscribed in Ogham … the institution is indebted for these rare monuments, to the zeal and research of Mr. Abraham Abell of Cork, and the author of the present work, who have by their labours, in this instance, it is hoped, contributed to set at rest the questio vexata of letters in Ireland, before its conversion to christianity.

The Windele papers and other manuscripts in the Royal Irish Academy library in Dublin contain field notes, correspondence and other details on ogham stones, composed by Windele, Abell, Horgan and other antiquarians. These may be of interest, and could hold additional information on the Coolineagh ogham stone.

The affairs of the RCI have long since ceased and Coolineagh ogham stone was ultimately transferred to University College Cork (formerly Queen’s College, Cork). Ironically, the RCI was instrumental in the establishment of the College, during the 1840s. Today, Coolineagh ogham stone graces the Stone Corridor at UCC, as part of an impressive and ancient collection. Keeping it company are its colleague from Glounaglogh and another Aghabullogue ogham stone, discovered in the townland of Tullig More.

Some might contend that archaeological items such as these should be kept, returned to, or displayed in their place of origin. At least at UCC these ogham stones are relatively nearby, and are accessible at no charge to the public. Three ogham stones from Rooves More, in neighbouring Ovens parish, were not so fortunate, having crossed the Irish Sea under the stewardship of General Augustus Henry Lane-Fox Pitt Rivers, and ended up in the British Museum. Perhaps, in a way, it is fitting the ogham stone of Coolineagh should finally reside here ‘where Finbarre taught’, close to the alleged monastical site of St Finbarre in Cork, having come here from the mid-Cork ecclesiastical site of his friend and confessor, St Eolang of Aghabullogue.