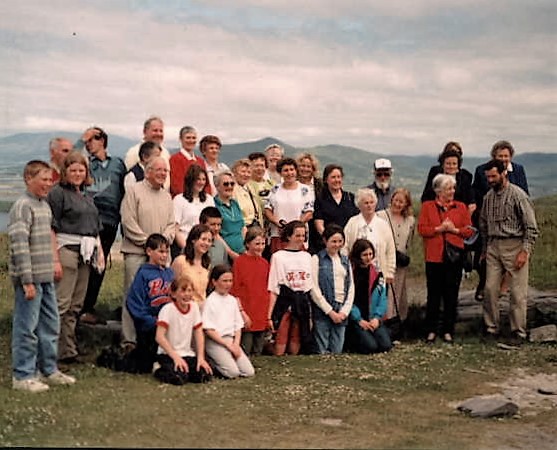 ACR Heritage is not the first group aiming to preserve and promote the heritage/history of Aghabullogue Parish and its environs. In ways we are continuing the efforts of others before us, and fortunate to be able to rely on their groundwork. Almost 30 years ago, a group of local people came together and formed Coachford Historical Society. During its existence this Society organised outings, lectures and produced some fine publications. It is important to bring attention to its existence, so as to retain a connection to our past and also to appreciate the past efforts of those before us. Indeed, some of this Society’s members remain active as members of our own Heritage Committee. We thank Anthony Greene for the following details.

“One thing can lead to another. When Seamus O’Donoghue retired as Principal of Clontead (Coachford) National School that devil Time lay heavily on his hands. Or it would have, had he not felt that it was appropriate and necessary that the story of Aghabullogue Parish and Coachford Village should be told while there were still those living among us who remembered the parish as it was, before the days of jet lag and time pressure. So it was that on Tuesday March 14th, 1989 a meeting was held in the Church of Ireland with the intention of forming a Local History Society.

Over the years four works appeared, giving an overview of the previous year’s talks and discussions. These were ‘The Coachford Record, Vol 1’ (1990), ‘The Coachford Record, Vol 2’ (1991), ‘Clontead (Coachford) National School 1842-1992 incorporating the Coachford Record, Vol 3’ (1992) and ‘The Coachford Record, Vol 4’ (1993). In addition Seamus published his monumental account of the Flooding of the Lee Valley, Seamus and Mary Lynch produced a biography of the Fenian leader Rickard O’Sullivan Burke, Joe Healy authored a most successful book on the three villages in the parish. Meetings and outings continued for several years, and some very interesting visiting speakers came. None more so than Rev Pat Sheehan, a former curate in the parish, who had the story of the Vocational School (now Coachford College) to tell.  In time, membership declined as age and the reaper took their toll on the membership, and reluctantly but realistically, it was thought best in 2015 to bring the society to a close.”

The four booklets and other publications produced by Coachford Historical Society are now out of print, but are available at local libraries. They are well worth a look, and contain a wealth of local history and information. We are fortunate that they exist, as a testament to the good work of Society members. Our next blog post will examine some of these publications.